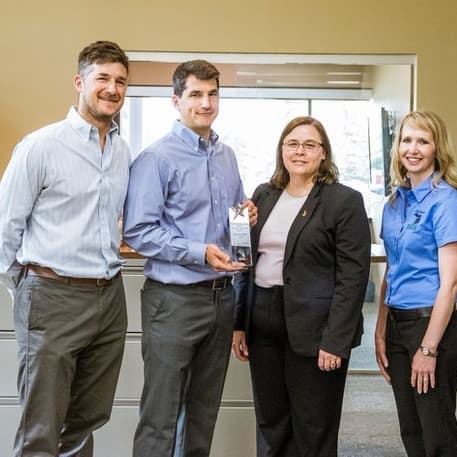 LANSING, MI -- The Grand Rapids maker of The Gluten Free Bar is the first-ever recipient of the Michigan export "Rising Star Award."

The accolade, from the Michigan Department of Agriculture and Rural Development, was presented earlier this month.

The inaugural award was created to recognize a company new to exporting or just starting to increase exports into one or more countries.

"The Gluten Free Bar sets a great example for other small- and medium-sized companies as to the opportunities exports provide in generating more sales and growth for a company," said Jamie Clover Adams, the department's director, in a statement announcing the award. "Exports are critical to the Michigan food and agriculture economy, and companies like The Gluten Free Bar are a vital part of the growth."

Michigan exported $2.8 billion in food and agriculture products in 2015. The state's biggest markets are Canada, Japan, China, Thailand and Mexico.

Exports help boost farm prices and income, while also supporting over 22,600 jobs both on and off the farm in food processing, storage and transportation, according to Adams.

Every $1 in export activity generates another $2.93 in economic activity, meaning Michigan's total agriculture exports of $2.8 billion have a local impact of an additional $8.2 billion.

"We've had a lot of help since we started exporting in 2015, and we're excited to continue our momentum in the years to come, which will ultimately add more jobs and positively impact our community here in West Michigan," Wahl said.

The company's exports have doubled in a year, creating two jobs.

The demand for gluten-free goods has been growing around the world. In the United States, the market for these products has more than doubled since 2011. Similar trends are being seen in Canada, the United Kingdom, Italy and Australia.

To be eligible for the award, the products must be more than 50 percent grown, processed or manufactured in Michigan.